"commonly abbreviated as STAB, is a 50% boost to an attack's power when the attack's type is the same as one of the types of the Pokémon using the attack" but in the Damage modification article, it says stab does 150% damage. Which is which? Please fix. Penubag 04:23, 18 September 2008 (UTC)

What would happen if porygon used conversion 2 and changed into the flying type, then used aerial ace? Would porygon get STAB?

It was found that it had no STAB due to that Normal actually being the glitch type. Even if they were Normal/Normal (which apparently all mono-type Pokémon are internally), then they would only get a single STAB. See http://profglitch.proboards.com/index.cgi?action=display&board=gcltempboard&thread=369&page=1#4631. --SnorlaxMonster 08:13, 25 July 2011 (UTC)

Explosion Get STAB From Lickilicky?

Oh, now I see. They said contrary to Nintendo's official guides. Thus it would receive STAB. Sorry about that.

Do the moves boosted by these Abilities also receive STAB, if applicable? The Pixilate article says yes, but others say nothing. Furthermore, according to the tests of someone on Talk:Refrigerate (Ability), Refrigerate does not stack with STAB. The Aerilate Talk page is completely unsure of whether STAB applies. If both Aerilate and Refrigerate are like Pixilate, then "plus any other modifiers" should be added for clarity. If not (which would make no sense), each article needs to say so. --TheVeryBest 22:01, 21 March 2014 (UTC)

What would happen if a Pokemon used Hidden Power, and that typing of Hidden Power was the same typing of the Pokemon? Like if a Dragonite used Hidden Power and it was Flying or Dragon Type, would the Dragonite still get STAB from the move? I might've just skipped over information though, but I was just wondering. --AngelicEspeon (talk) 04:11, 5 February 2017 (UTC)

Dragonite would indeed get STAB from a Flying- or Dragon-type Hidden Power. As the article states, "if the user's type matches their Hidden Power type, they do receive same-type attack bonus." --Carmen★ (Talk | contribs) 04:26, 5 February 2017 (UTC)

Also not sure we need the table. My suggestion is to change it to the following:

We might want to include a note about Struggle and Beat Up as well, but I agree that the table is pretty much redundant, mostly listing moves that deal direct damage. We could also mention that Shadow moves and Weather Ball during a shadowy aura can't receive STAB. Suic (talk) 18:28, 11 June 2020 (UTC)

I'm against removing the table in its entirety, as removing it relinquishes all the valuable information to a category page that isn't necessarily easily viewable or explanatory. I am for the table being changed to explicitly discuss all moves that deal direct damage (as they are not affected by STAB) and the notes also listed above re:Struggle. --Spriteit (talk) 08:57, 13 June 2020 (UTC)

Shadow moves are already mentioned in the prose. If it's kept, I propose to remove Revelation Dance from the list, since it's already mentioned that typeless moves won't get STAB, and there's no "type match" anyway (as mentioned right before the list). If anything, we could explicitly mention the move being typeless in the prose. Nescientist (talk) 11:46, 13 June 2020 (UTC)

The shadow moves part was added shortly after I posted the message here, but under spin-off games, so I moved the info to where it is now. That's not to say we couldn't have them mentioned in the page in some other way, if that would be better.
I'm still not convinced about keeping the table, but I'm open to suggestions. Suic (talk) 17:26, 13 June 2020 (UTC)

I was nuzlocking Pokemon XD: Gale of Darkness and took too much damage from a Shadow Break to be a non-STAB attack. Here's the clip https://www.twitch.tv/videos/685021839

I used Smogon's calculator to calc how much damage Electabuzz could do because it was higher than I expected. In this calculation, we have a max attack IV +atk nature lv 43 Electabuzz attacking with 75 BP Shadow Ball, standing in for 75 BP Physical Shadow Break in the video.

With the crit, this Electabuzz doing a non-stab move maxes out at 104 damage, more than the 122 it ended up doing.

In contrast, here are the calculations if Electabuzz is Electric/Ghost (Standing in for Electric/Shadow). 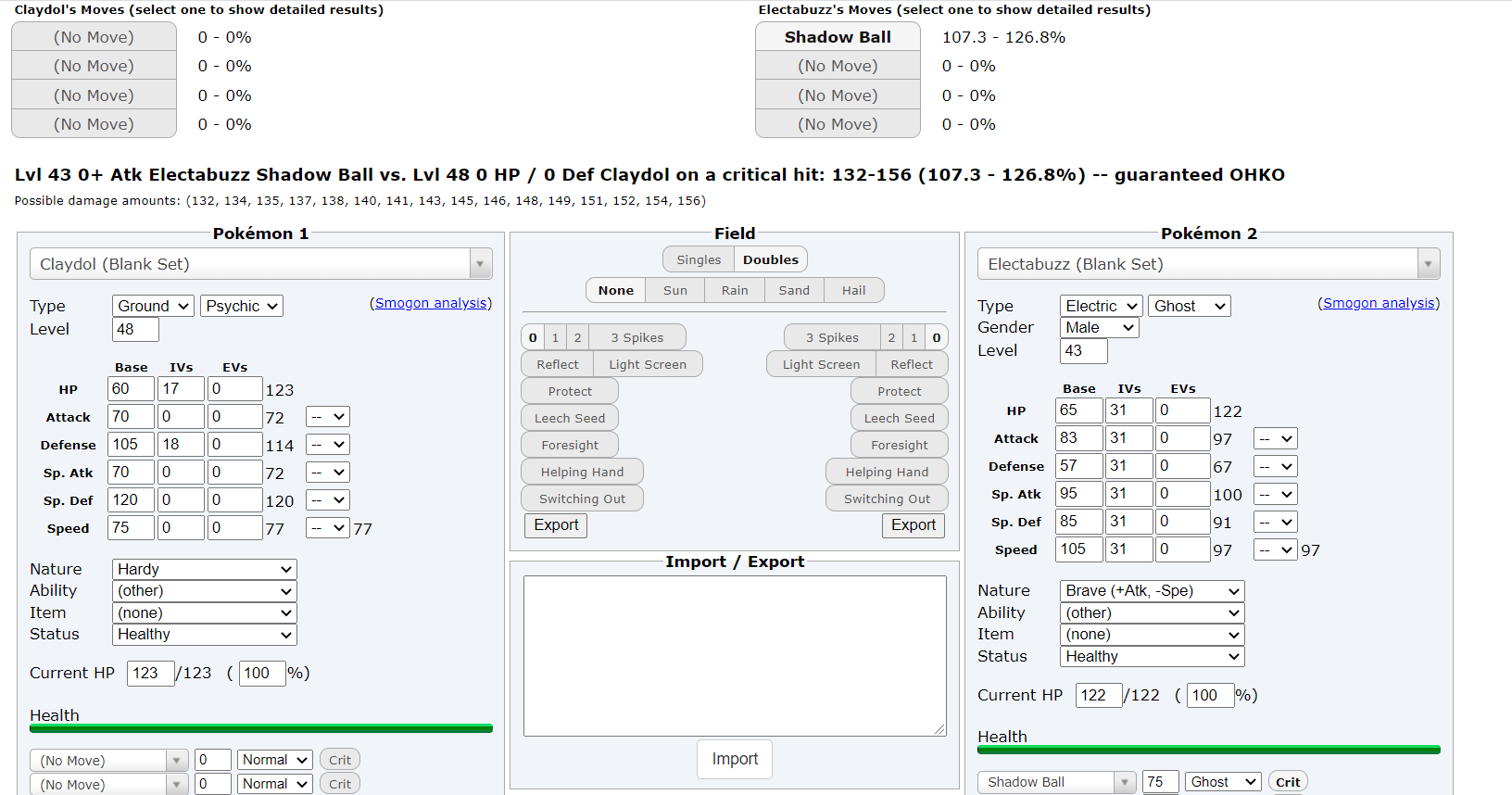 I also wanted to provide a picture of min IV -atk Electabuzz to show that the amount of damage Claydol took was clearly in the range of STAB options rather than in the non-STAB range. 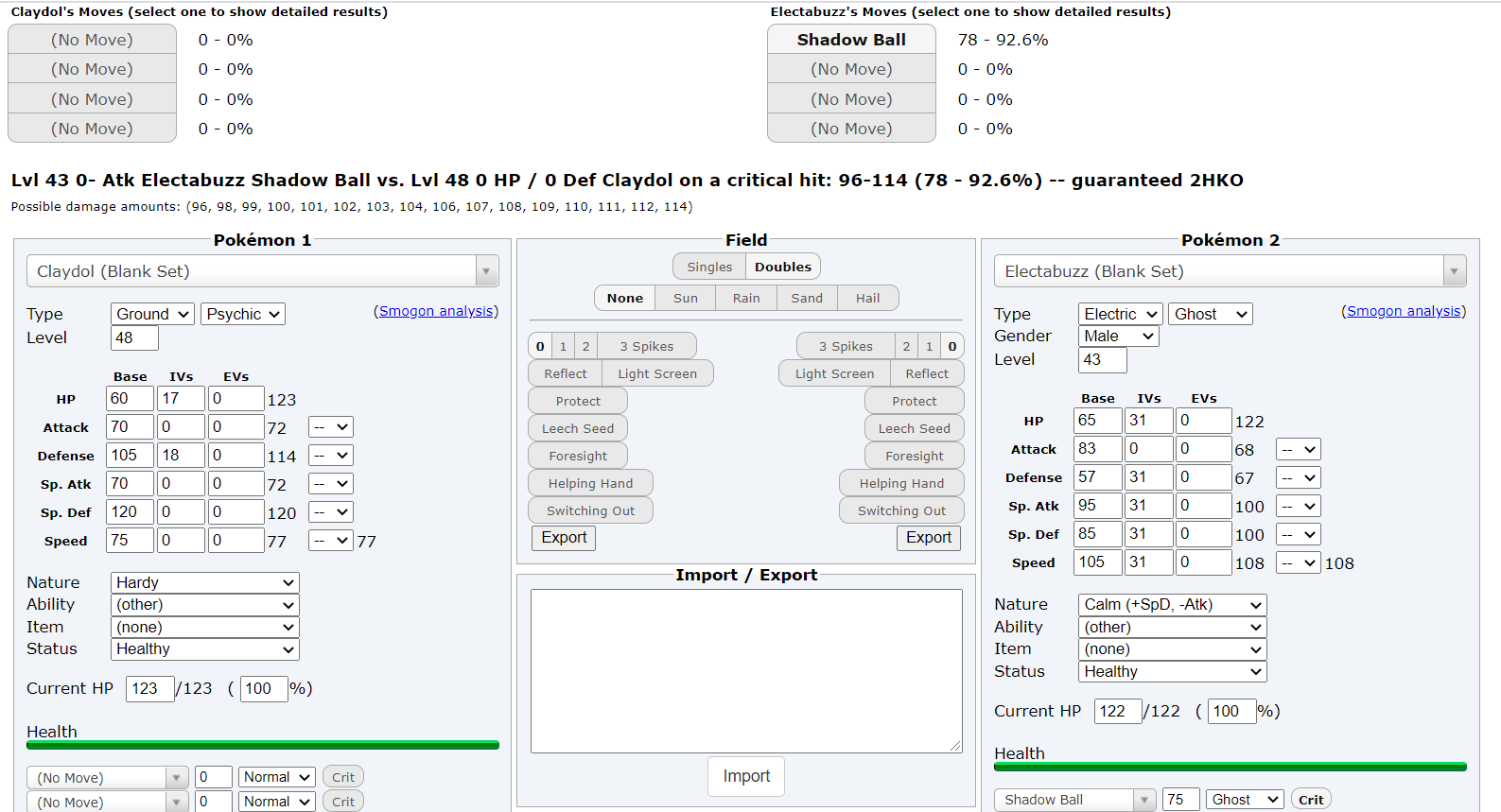 I think the only answers are that Smogon's calculator is off for XD or that Shadow moves in XD receive STAB.

Shadow moves lack a typing (always being noted as Shadow-type in game) and while their attack power is usually lower than other moves, they will always be super effective regardless. Thus, it is not possible for them to gain any STAB, as this would mean a Pokémon would also need to be a Shadow-type too.. Frozen Fennec 04:16, 20 July 2020 (UTC)

That's what I thought too until I calculated this. Look at my numbers, I've double checked them, there's no way that Electabuzz does so much damage without getting STAB from the move. That or Smogon's calculator is off. Additionally, I can't edit my post as it considers it vandalism to take these pictures out and make them links. Spegasparce (talk) 04:19, 20 July 2020 (UTC)

It is actually Shadow Sky that implicitly boosts the power of Shadow moves by 50%, which happens to be exactly the boost STAB would give. (I haven't read or seen all of this, but I believe that's what the calculator is missing.) Nescientist (talk) 15:51, 21 July 2020 (UTC)