Hi. My name is Jerry, aka Bulbajer. My favorite Pokémon is Bulbasaur, so that's where my username comes from. I'm a typical college geek that hides his nostalgic love for Pokémon.

My earliest memories of Pokémon are 1) seeing a Pikachu keychain on a classmate's backpack in kindergarten and 2) watching a bit of the anime at a friend's house (I think it was Attack of the Prehistoric Pokémon). However I really only got interested in Pokémon a few years later when I started watching the anime. Ash was making his journey through Johto when I first tuned in. Later, I received my first Pokémon TCG cards (from the Gym Heroes and Gym Challenge series). In around fourth grade, Pokémon and Yu-gi-oh! were all the rage among boys, and after losing interest in the latter, I purchased Sapphire version for the Gameboy Advance. I don't play it much anymore, but I still visit my 150 Pokémon caught (I've seen 186) and 8 Hall of Fames. (See my teams for each of my games below)

After Sapphire, I got interested in the TCG, and started collecting (I prefer collecting to battling). Currently I have about two-thirds of the Pokémon up to #386. I don't collect Generations IV or V because I have no interest in them and I don't like the new card styles. (And Gen. V Pokémon really stink, imao.) Late sumer 2012, I found a Cloyster in a shop, completing my collection of the Gen. I Pokémon!

Besides Sapphire, I own LeafGreen and Red Rescue Team; I play LeafGreen off an on, but I gave up Red Rescue Team. I also own (both literally and figuratively) Super Smash Bros. Melee, which I have completed except for a few trophies.

My main areas of interest in Pokémon are the Pokémon themselves, the anime, and recently, the geography of the anime. I have watched the entire original series twice, which totally dominates the later series. I did follow the Advanced Generation series up until Kids' WB cut it (I don't receive Cartoon Network).

I have known about Bulbapedia for a long time; I didn't really become interested in it until I started watching the anime over again. I finally joined on February 21, 2010; my first edit was to EP117, to which I added trivia and an error. A bunch of my edits have been undone by more experienced users, but I am getting better, and I aspire to be as wise in the ways of Bulbapedia as any!

Pages I have started

Maps of Ash's Journeys in the Original Series

(note: these are rough estimates) 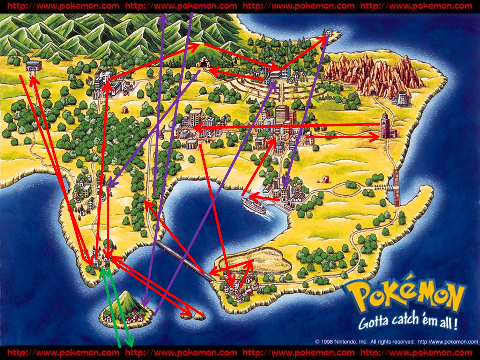 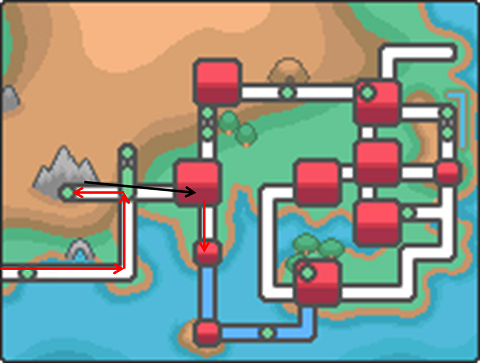 Weepinbell (♂) (others to be determined)

My version of a world cooperation organization - for Pokémon, by Pokémon. Based on the idea of the UN, but loosely. Delegates have rankings. The Legendary Council includes all Legendary Pokémon up to Deoxys (I don't really like Generation IV that much) and is comparable to the Security Council of the UN; the General Assembly features non-Legendary Pokémon, with a delegate for each type at each delegation rank; this can be compared to the UN General Assembly. General Assembly delegates are elected. For the election, each non-Legendary species of Pokémon nominate candidates, and then each type in each delegation rank vote. Members of the Legendary Council are permanent (with a few exceptions, I assume that there are only one of each Legendary Pokémon).

Jerry's Pokémon (if they were real)

Unless it is marked otherwise, the Pokémon are male or neuter.

I like social studies, Percy Jackson and the Olympians (Percabeth 4evah!), Harry Potter, Redwall, Teen Titans (BBRae all the way!), playing and listening to music, and much more. You can read more on my interests at my blog: Bulbajer's Encyclopedia I also play NationStates, in which I administer the region Pokemon World, and Call of Duty 4: Modern Warfare.