I'd say it's worth a mention that slowpoke has become slightly famous on 4cahn's /b/ board as of late? - unsigned comment from Titan (talk • contribs)

And I think memes like that shouldn't be included until they spread outside of 4chan more, like So I herd U liek Mudkips did. --AndyPKMN 12:52, 11 November 2010 (UTC)

(Sorry for my bad English) I believe, you have to center the sprites of Crystal and Gold, because it don't looks beautiful when the sprite of Slowpoke lays so below. For example the Crystal und Gold sprites of shiny Slowpoke are in the center of the picture and in my opinion that is distinctly prettier to watch (uniformity)!--LaBumm 14:12, 6 January 2011 (UTC)

Slowpoke based on a Giant Otter rather than Leucistic Hippo.

Its marine nature, fishing habits and association with shellfish have me believe that Slowpoke and its evolutions are based on various species of otter rather than a Hippopotamus with leucism. It specifically resembles a young Giant Otter.

Just noticed this so I though I would point it out, that Slowpoke is supposed to evolve by having a Shellder clamp its tail, but they are both opposite version-exclusives in FireRed and LeafGreen, with Shellder being exclusive to FireRed and Slowpoke being exclusive to LeafGreen. So ironically, Slowbro and Slowking technically shouldnt be obtainable at all in those games. Vuvuzela2010 ☠ 16:26, 16 October 2011 (UTC)

Slowpoke is based on a hippopotamus, a cartoonish one specifically.Bennell 20:18, 20 March 2012 (UTC)

Dang!Are you ever happy ? It was specied hippo in the origin section, but still there is something you don't like at any other origin page. Instead of commenting, why don't you bring proof and show them to admins ? It would be much easier.----DJWolfy 20:25, 21 March 2012 (UTC)

Salamander also don't have fire on the tip of their tails. Either way, it says Hippopotamus on there anyways.--ForceFire 02:38, 24 March 2012 (UTC)

Based on the linked Wikipedia entry and the above hippo picture, Slowpoke looks more like a giant salamander than it does a hippo. I think it can stay. --Darth Zekrom 20:55, 27 March 2012 (UTC) 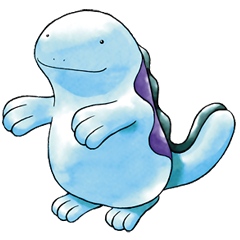 The Sea Otter is the only species of otter that is marine and associated with shellfish.Bennell 15:42, 5 April 2012 (UTC)

I personally now believe that the Slowpoke family are a mix between Pygmy Hippos and Giant Otters.

In the trivia section of Slowpoke's page it is stated that Slowpoke has never been seen using a Shellder to evolve outside of the Anime. This is incorrect, in the River area of the original Pokemon Snap game for Nintendo 64 you could lure a Slowpoke close to the water's edge and watch as it stuck it's tail to do some fishing. A Shellder would latch onto the Slowpoke's tail and cause the Slowpoke to evolve into a Slowbro. --Raizerninja (talk) 04:46, 21 January 2014 (UTC)

"Only Pokemon with (type) and (egg group)" trivia

I once pointed out that Slowpoke's evolution family were the only psychic Pokemon in the monster egg group. Someone undid my edit, saying this specific kind of trivia is not allowed. Does this really break some rule? If it does, does the trivia in Tyranitar's article need to be deleted as well? sumwun (talk) 18:26, 13 February 2018 (UTC)

May the Slowpoke is based on a Prorastomus sirenoides, an extinct species of primitive sirenian that lived during the Eocene Epoch. [2] THSPIKE (talk) 18:23, 23 April 2019 (UTC)

Difficult to justify; slowpoke is not and has nothing in common with whales, nor is it stranded (has never been fully aquatic/can just walk/even caught a train). SJ (talk) 09:16, 10 January 2020 (UTC)

Galarian Slowbro is specifically Poison/Psychic, not Psychic/Poison. If I'm not mistaken, that makes Galarian Slowpoke the only Pokemon to have the position of its type change during evolution (from primary to secondary, in this case).--Gou (talk) 04:53, 15 July 2020 (UTC)

There's a similar situation with Mime Jr. and Galarian Mr. Mime, going from Psychic/Fairy to Ice/Psychic. But yes, Galarian Slowpoke is currently the only single type pokémon where this happens. AmbientDinosaur (talk) 07:40, 15 July 2020 (UTC)