Since editing is only for certain people, can someone edit the Pokemon because Pignite, Oshawott and Snivy are on the latest poster. Playerking95 (talk) 06:02, 15 February 2013 (UTC)

This page appears to say that the Mewtwo in this film is indeed the same one from before, just having changed personality-wise after traveling the world. --The Great Butler (talk) 09:17, 15 February 2013 (UTC)

I looked at the description and it meant personality wise, it wasn't the same from the first movie. In the trailer, you can see that Ash definitely recognizes it as the old Mewtwo. Infernapefan95 (talk) 10:50, 5 May 2013 (UTC)

The second paragraph of the lede is way too winding and repetitive. I'd edit it myself, but the article's fully protected. Can someone edit it to something like the following, please?

The movie is set to feature Genesect and Mewtwo in prominent roles. The "Genesect army", a group of five Genesect, will appear in the film, led by a Shiny Genesect. The other four Genesect represent each of the four Drives. The Shiny Genesect is set to appear in Best Wishes! Season 2: Episode N before the film's release.

New poster for the movie.

Apparently, since I cannot edit this, can someone update the movie poster to include the more recent one (which now includes Mewtwo) to the page? [1] Thanks! (Source: [2] )

Unfortunately we can't upload an image sourced from Serebii, as they are another fan site. Thanks anyway! --ZestyCactus 02:08, 7 March 2013 (UTC)

Should it be added to this page? Like: A new Pokemon or forme related to Mewtwo will also be appearing in this movie. Currently, it is unknown what this forme/Pokemon's role will be. (etc) Or are we waiting for more info about it on the 18th...? --Phoenixon (talk) 20:42, 11 April 2013 (UTC)

It isn't confirmed this new Pokémon or form of Mewtwo will be appearing in the movie. A poster of this movie was released with this new Mewtwo on it but as far as I know it isn't revealed to be official as of yet. As long as there is no official information on it, nothing concerning it will be added. ☼ BlazingFist ☼ 20:48, 11 April 2013 (UTC)

hi guys i just learned that the new Newtwo will be shown in a trailer on april 18th just as a heads up so in-case i am wrong i will retract my statement but i got it from a greast source and just be on the look out on April 18th. --Zmanstardust (talk) 17:33, 12 April 2013 (UTC)

http://www.nintendolife.com/news/2013/04/corocoro_confirms_new_mewtwo_form It's a new alterante form of Mewtwo, it's not a separate Pokémon. Interestingly, if you see this image. Both Gensect (or whatever it's spelled) and Mewtwo has alternate forms. Mewtwo has two alternate forms.

Aw! I thought it was real :s I'm sorry, my bad. However, the other website CoroCoro officially confirms that the Mewtwo alike pokemon is actually Mewtwo's awakened form. --MsIsamisa (talk) 17:55, 15 April 2013 (UTC)

No, it was confirmed that the Mewtwo-like Pokémon was a new form of Mewtwo, it was reported on this site too some time ago. However, it is as of yet unconfirmed that this form is called Mewtwo's Awakened Forme. ☼ BlazingFist ☼ 18:00, 15 April 2013 (UTC)

So... yeah, someone would add this eventually anyway, but I'd just though I'd mention it. The new just released trailer revealed multpile Wooper, multiple Lotad, multiple Surskit, a Seismitoad and a Crustle (not confirmed if Cilan's) will appear in the movie. Also, this Eric person, which appeared in the scans of the manga adaption is also confirmed to be part of the actual movie. ☼ BlazingFist ☼ 23:28, 17 April 2013 (UTC)

Just putting as a confirmed source just so others see that there is evidence now because if someone didnt do it now it would be questioned why that no one put any confirmation. so just helping anyway about the trailer how come mewtwo sounds like it is has a female voice actor? --Zmanstardust (talk) 02:25, 18 April 2013 (UTC)

Should we remove the link to Mewtwo (anime) on the page since this voice change suggests that it's a different Mewtwo, and nothing's been confirmed yet? --Darthrai (talk) 06:04, 18 April 2013 (UTC)

To do so would be to ignore everything still pointing to it being the same Mewtwo. Anyway, the guest cast is Koichi Yamadera as Red Genesect, Reiko Takashima as Mewtwo, and Takashi Yoshimura as Eric. --The Great Butler (talk) 06:52, 18 April 2013 (UTC)

Can someone add this to the top and bottom of the page please:

Error in the cast template

The Japanese characters for "Red Genesect" and "Mewtwo" are in the incorrect places in the template. They need to be swapped with the characters for "Reiko Takashima" and "Kōichi Yamadera." --The Great Butler (talk) 22:34, 9 May 2013 (UTC) 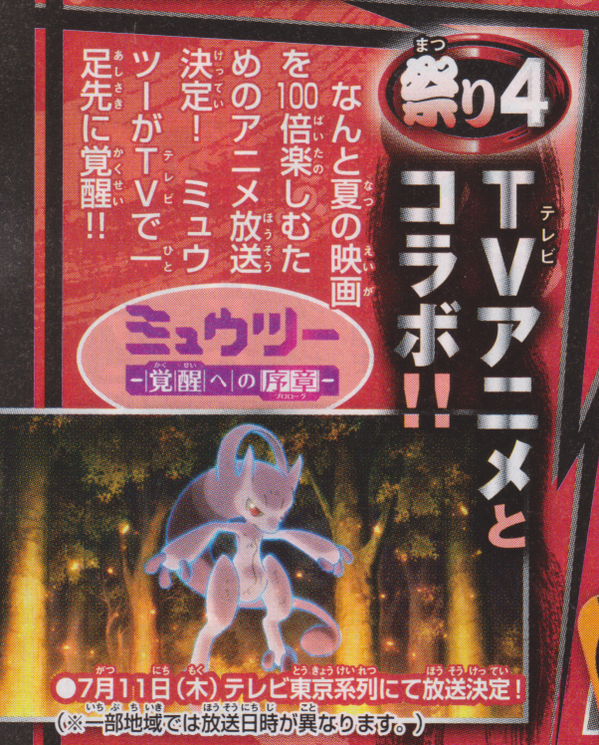 Mewtwo: The Prologue to its Awakening is going to air alongside the Kyurem movie on July 11. This needs to be mentioned in the opening of this article. --The Great Butler (talk) 21:50, 13 June 2013 (UTC)

-It's a different Mewtwo, so the new Mewtwo needs to be given a page of its own like "Mewtwo (Unova)." Ash never mentions the old Mewtwo. -Mewtwo's new Forme is apparently not named. -N and all of the Unova rivals appear in the credits, so they need to be added to the character list. --The Great Butler (talk) 21:04, 30 June 2013 (UTC)

Team Plasma Grunts appear in a scene flashing back to Genesect's origin, and Mewtwo's creators need to be listed as well. --The Great Butler (talk) 23:31, 6 July 2013 (UTC)

Earlier today I realized the fact that Sylveon was going to be introduced in this, so I looked at the poster to see him/her. After locating Sylveon I decided to see what other Pokemon appeared, and I noticed this little fella: (link because this wiki keeps me from uploading images -.-) [3] I tried to find him on X and Y's page, and while he bears a small facial resemblance to Scatterbug, it obviously isn't him. So is he a Pokemon that hasn't been announced yet? Or am I just so new to the Pokemon series that I haven't encountered him and he's actually a really old Pokemon? Nutter Butter (talk) 18:25, 12 July 2013 (UTC)

There's a shout-out to the Zoroark movie in this film. One of the video monitors in the scene in Times Square is playing a Pokemon Baccer match between the Jubilife Reds and Cianwood Greens, the two teams that were playing each other in the prologue of Movie 13. --The Great Butler (talk) 03:39, 13 July 2013 (UTC)

That would be at least three months before I'd expect the dub to be released, based on the pattern set by previous films. (Lately they've generally been released either in December or early the following year, except the Arceus film which was released in mid-November.) I suppose it's possible that TPCI would try to lower the turnaround time for the anime, but we're gonna need more proof than "you heard from someone". Pumpkinking0192 (talk) 18:47, 16 August 2013 (UTC)

Are we sure this movie takes place in Unova I think it's more likely it takes place at the Decolore IslandsMariofan99 (talk) 12:07, 20 August 2013 (UTC)

Genesect and The Legend Awakened

Well, it does use English words rather than German words. Filb.de suggests that it is the English title, and they just haven't revealed the German one yet. --SnorlaxMonster 06:23, 8 September 2013 (UTC)

Hey, I just watch this movie english sub of Cartoon Network and it is completely different from the second trailer. The main events occured in night, rather than in day; Mewtwo met Ash group for the first time underground, rather than in the garden; Genesect never intentionally attacked the city, and people never be panic; etc.

I watched this movie on the Disney XD channel in the UK a couple of weeks ago, and in the version I watched they kept the Japanese ending theme. Should this be added to the article? Treacle (talk) 01:28, 22 June 2014 (UTC)

The article says that the Mewtwo was distributed at the Pokémon Center Stores for buying pre-order tickets, however, other retail stores (e.g. 7-Eleven, Toys-R-Us, etc.) also sold these tickets and distributed the Pokémon Hills Mewtwo. Will correct this. --Rikeo (talk) 05:44, 17 July 2014 (UTC)

This for trivia, because when the Mewtwo save our heroes, Ash asked "who are you?" forgetting the all seen a Mewtwo before in Johto. --HoopsterJohn (talk) 01:16, 19 December 2014 (UTC)

Maybe he was taking in consideration nicknames? or perhaps the fact that this Mewtwo may not know is a mewtwo --PipProductionCo (talk) 10:05, 11 January 2015 (UTC)

So the movie was added to Netflix recently. I watched through it, and when I couldn't believe my ears...the Japanese ending theme was kept! No fooling. The entirety of the movie was the English dub as you'd expect, but then they decide to use "Smiling Face" instead of "We're Going Home" in the credits!

Mewtwo: "Stop that! People live in there!" | Is that an error?

Genesect attacks a building, and then Mewtwo says "Stop that! People live in there!" At that point, Mewtwo still hated humans, and earlier Mewtwo didn't care enough about Ash and the others; just Pikachu and Axew. You know what I mean? Unowninator (talk) 17:12, 17 August 2016 (UTC)

I thought Mewtwo just disliked/distrusted humans, not outright hated them. And even so, it's not like she's a sadistic monster who'd gladly allow other living beings to die. TheFatPanda (talk) 20:32, 18 September 2016 (UTC)