"Gary has an attitude of catch first, ask questions later, as seen in It's Mr. Mime Time."

I recall hearing this in the dub; is it a dub only line? --Paperfairy

Look, I know the Jr. novelizations of pokemon aren't exactly canon with the pokemon series and all that, but didn't they mention Gary also having a Charizard and a Venusaur in addition to his Blastoise in the book "Stage fight"? I mean, sure, that book might not have been canon (It mentioned Ash's Pidgeot still being under his command despite his releasing it right after it evolved and defeated Fearow), but shouldn't it at least be worth noting in at least the Trivia section? just wondering.

If we note that, then we'd also have to note the Charizard he toted in the Robot Chicken sketch "Pikachu Secret", from the episode Cracked China. --Shiningpikablu252 21:44, 24 September 2007 (UTC)

Those books were basically authorized fanfiction. It's non-canon, so it shouldn't be mentioned. --PAK Man Talk 23:09, 24 September 2007 (UTC)

I remember that Gary used to be a trainer, but he stop to be a pokemon researcher, I'm not sure which region, but here was even in Pokemon Housou/ Chronicles as such, shouldn't his status change from trainer to professor or something? - Gaiden 03:24, 07 October 2007 (UTC)

Technically now he's not yet Professor Oak the younger, because he hasn't been seen to get whatever one needs... and has no labcoat. He's on his way... but I don't think he's a professor yet. TTEchidna 20:45, 7 October 2007 (UTC)
I don't that he is a Rivel of Ash anymore , I think that Paul is more of Rivel than Gary.

Paul's more of an asshat than Gary now, yes, but Gary and Ash are still rivals, though on more friendly terms. TTEchidna 19:15, 9 October 2007 (UTC)

Its just like Max. He just befriended them and he never caught them. Hoothoot was just rented. That doesn't mean you own it. JmathTalk 18:15, 11 January 2008 (UTC)

I'm not sure if this is valid but, aside from the fact that he has the same voice actor, but he also wears the same clothing as the video game, in the Kanto series of Pokemon he wore the same thing or at least a strong look-a-like of his game counterpart, in the rest of the series (from the point of Pokemon: FireRed and LeafGreen) Gary changes to a black shirt and purple pants, I believe that ever since that time and the fact that his character was not designed to wear new clothing, that he still looks the way he is in Diamond and Pearl Series

Also, Ash, Brock and Misty changes their clothing during each arc, this is just something i felt i need to being to notice, if you already know this sorry. - Gaiden 07:23, 23 January 2007 (UTC)

When did Gary get a Houndoom?C Is for Cookie

Seeing as May's Eevee has evolved, should it really be mentioned as a counterpart to Gary's Umbreon? If a Pokémon is really needed for the sake of comparison, might I suggest adding her Wartortle to the part mentioning Gary's Blastoise and Ash's Squirtle? Eeveeman133 18:32, 3 July 2008 (UTC)

How do we know Dodrio is in storage or not on hand? SinceIts last appearance it hasnt been comented on so we dont know where it is, maybe status unknown?--David Aipom (Speaks To Me):] Sonic Electronic 20:26, 1 November 2008 (UTC)

Yeah, when he was talking to Professor Oak. I remember this seen. A list of all 150 (though I don't know how its possible because no one knew about Dragonite or Mewtwo) flashed on the screen when Bill was talking about how there could be many more. --ケンジのガール 21:00, 2 January 2009 (UTC)

It's called a retcon or inconsistency. And if they had known about Dragonite as a species, why didn't Bill mention that the mystery Pokémon was one? And don't tell me that Bill didn't realize the Pokémon's species due to never getting to fully see it, he had recorded the Pokémon's cry. He SHOULD have realized the Pokémon was a Dragonite by listening to its cry. Spideym 04:28, 13 May 2009 (UTC)

Of course we can't add pages of ALL of Gary's pokemon, as he has literally millions XD

In the article, it said that in "A Tents Situation", Gary came to Pallet, and challenged Ash to a battle (Eevee vs. Pikachu) and won. Didn't the battle happen in "A Rivalry Revival?" * (I'm now using star to refer to my old thingy.) Garyplusash 20:57, 15 August 2009 (UTC)

According to the "Main events" scetion in the episode pages, Gary challenged Ash (or vice versa) in A Tents Situation, but the battle didn't happen untill A Rivalry Revival. Both you and the article are right. User:Werdnae (talk) 21:15, 15 August 2009 (UTC)

Is that what his hair looks like now, or is that a bad angle? Because he looks completely different than he used to... so i was wondering if that was just a bad pic (and if so, can we get a better one?) or if he really just changed THAT much CherryParanoia 07:11, 23 August 2009 (UTC)

Oh, so he DID just change a lot. Because his hair is completely different in that picture, and i've seen some shots online in which his hair has the original style (but the new color). If i find them again, should i upload them here? CherryParanoia 20:52, 24 August 2009 (UTC)

There is nothing wrong with his hairs. It is just a shady look. Checkout gary's old picture and new one, there is a slight (a little) difference and that is because of shade (i think). --♫♪Adyniz♪♫ 03:48, 25 August 2009 (UTC)

It's nothing about the shade. It's the fact his hair looks more like Brock's in the picture. Like, it's not long enough in the front and everything. Thats why i thought it was just a bad shot. If his hair is still long in the front, then we need a new pic. If he's gotten a complete renovation... then it's fine. CherryParanoia 16:54, 26 August 2009 (UTC)

"Gary is the only main rival not to have at least one Grass-type Pokémon."

What exactly qualifies as a "main rival"? I would consider both Ritchie and Zoey as main rivals and they don't have Grass-types. Or was this person just talking about Ash's regular rivals? Gary, Paul, and Barry. Cause if that's it, then it's not really notable. I think it should be removed on the of either it's not notable due to Ash's lack of regular rivals or that it isn't true as Zoey is very much a regular rival and does not have a Grass-type. --ケンジのガール 20:07, 29 September 2009 (UTC)

Well, Paul, Barry and Gary are the rivals to appear the most but Ritchie also appears a lot. I wouldn't say that there is any main rivals, except Gary, and he isn't even really a rival any more. Solar Dragon 20:10, 29 September 2009 (UTC)

Gary is the only main rival not to have at least one Grass-type Pokémon.

Who counts as a "main rival"? If we are just counting Ash's rivals, then there are only two "main" rivals - Gary and Paul. If we count Barry then we should probably count Richie, who doesn't have any grass types. If we are counting Contest rivals then Zoey doesn't have any grass types. If we really are just counting Gary, Paul and Barry, then is it really notable, especially given that the following are also true: Gary doesn't have a fighting type, Barry doesn't have a ground type, rock type, fire type or Dark type, while Paul is the only one with an Ice type and Gary is the only one with a dragon type. Werdnae (talk) 20:17, 29 September 2009 (UTC)

Or at least a very bad piece of trivia as we could go through them all, as Werdnae said, and place them all up. It is just pointless so it was best to remove it. Solar Dragon 20:25, 29 September 2009 (UTC)

Didn't he and Ash both start their journey on there 10th birthday? If so, it should be put in the trivia that he and Ash both have the same birthday. --Kimori Geckarbor Hinoarashi 22:53, 18 October 2009 (UTC) Kimori-Hinoarashi

I think the anime said that Oak gives out his Pokémon once a year. I also think the "starting at 10" thing comes from the games, while in the anime trainers can get their license to be a trainer at 10. I think... The Dark Fiddler - You enter a poorly lit room... 23:13, 18 October 2009 (UTC)

Are we sure that the Dodrio that Gary has is the same Doduo he had at Oak's lab? I mean, in that episode, Gary was revealed to have over 200 Pokémon, implying most if not ALL non-legendaries known at the time, as well as multiples of some of them. Therefore, it is possible, nay, likely, that this Dodrio and that Doduo are not the same Pokémon. Unless I missed something, of course. Gary never identified this Dodrio as the Doduo from Showdown at the Po-Ke Corral, did he? - unsigned comment from Missingno. Master (talk • contribs) 20:38, 26 April 2010 (UTC)

For future reference, because I have seen people reverting it back to black, it IS green and there is proof on Puds' talk page [1]

I was wondering if his badge case was the first badge case shown by a main character and brought the possibility of having badge cases in future seasons?--Pokemon26 19:46, 2 November 2010 (UTC)

Oh, okay then. Just because I couldn't remember a single instance, and I was assuming that people ony say his surname is Oak, because, you know, Prof. Oak is his grandfather... But you know, if the professor was his mother's father, Gary's surname would probably be something else. Except is somehow both ot his parents are called Oak. Krisi 02:23, 19 February 2012 (UTC)

Sometime during the Advanced Generation series (or so at least I think, I might be wrong), I recall Ash having a flashback about his meeting with Gary in some snowy area. I'm almost positive to had seen all episodes, movies and side story episodes up to that point, but I don't recall that particular scene in any of them. Did that happen in one of the Pikachu short stories or not at all and I'm just imagining things? I hope someone knows what I'm talking about. EDIT: could be from AG187--Elveonora (talk) 22:02, 15 November 2013 (UTC)

We've seen Gary's mom a few times driving around their convertible that Gary is in with his cheerleaders/fans/girlfriends. But I see no page or mention of her. Why not? I think it's important to know who Samuel Oak's daughter is, either in the games (canon) or anime/mangas. 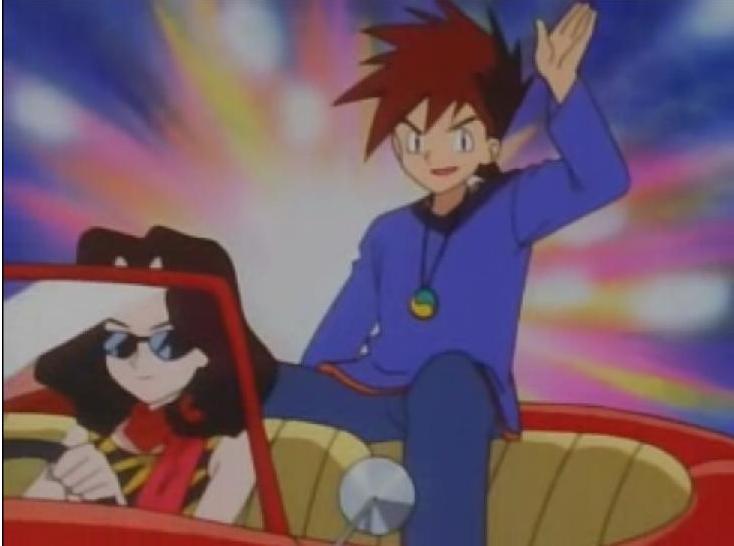 Also, does his cheerleader group of six fans from seasons one and two have names?

Do you have any proof that that's Gary's mother? Just because she's driving doesn't mean she his mother. It could just be one of the cheerleaders who is old enough to drive. And the cheerleaders were never given names.--ForceFire 04:02, 22 March 2017 (UTC)

That Ash & Gary history trivia with AG086 and the first episode

I can’t help but feel that the placement should be reversed. And also it disregards the flashbacks during the Silver Conference of the split Poké Ball, which already indicated they’d known each other beforehand--KnightGalarie (talk) 16:00, 29 June 2020 (UTC)