Looks like there is disagreement about Tsutarja's move. In my opinion, it can't be Grass Mixer. Just compare it with Shooti's Tsutarja's GM. Ash's move features bluish-green leaves, not yellow-green spiral.----無限の知性 ◎ ＤＥＮＮＯＵ◆ＺＥＮＳＨＩ 11:35, 28 October 2010 (UTC)

Just look at Mamepato's gust, did it look like that in the previous regions? No. They can change the animation. So, don't add anything till it's confirmed. Thank you. ♫♪AdyNiz♪♫ 11:40, 28 October 2010 (UTC)

Yeah, I'm not adding anything until her first battle, I'm just saying that it definitely is not Grass Mixer; they can also change Leaf Storm's animation, which is more likely.----無限の知性 ◎ ＤＥＮＮＯＵ◆ＺＥＮＳＨＩ 11:43, 28 October 2010 (UTC)

May be. So, I think we just have to wait for Tsutarja's next battle. ♫♪AdyNiz♪♫ 11:51, 28 October 2010 (UTC)
Did anyone consider "Grass Oath" and Adyniz, they aren't going to change the animation of a move only a few episodes later especially when it's of the same species. If this was Carnivine doing the attack (or insert grass Pokemon that can learn grass mixer if Carnivine can't) then I might be able to see the argument. But yeah two different Tsutarja's with the same move with different animations, doesn't quite make any sense. Personally it's either Grass Oath (since we have yet to see its animation, assuming this isn't it), and Leaf Storm (the only other grass attack that can be remotely redone in animation this "soon"). Air Cutter is a bad example since this is a new series so it likely changed, however a few episodes later and Grass Mixer changes drastically? Not only is the color different, so is its animation. Shooti's Tsutarja's tail controlled the attack Grass Mixer. It looked like Ash's Tsutarja's whole body was controlling this attack (assuming it didn't launch like a normal attack, it's not that fresh in my mind, if Tsutarja was in the swirling leaves as well when trying to hit Mamepato or it was an attack already launched) --Dman dustin 12:00, 28 October 2010 (UTC)

They have already changed the animation for Mamepato's Air Cutter from BW002, so it could be Grass Mixer, peromaly I think it is Grass oath, I dout they'd give her a move as powerful as Leaf Storm this early. Diamond Lanturn CodeName: 05308 14:36, 28 October 2010 (UTC)

"The user attacks by sending out a pillar of the grass. A wetland is created in the surrounds when you combine it with the certain Water-type move" Ataro 23:06, 31 October 2010 (UTC)

Look at its game image:

Just because she didn't use the move in the most recent episode doesn't mean she hasnt used the move recently... i think we should do like 5 last appearances and if not used by then its considered not recent.--Burgundy 21:12, 4 November 2010 (UTC)

This is not the place to discuss this. You should bring this up with Kenji since she is the leader of Project Anime. --HoennMaster 04:59, 5 November 2010 (UTC)

Does anyone else notice she looks darker when she uses Vine Whip? Here's her normally and here's her using Vine Whip.

This could be caused by plenty of other factors, most notably the methods and pieces of equipment used to obtain those images. Likely not worthy of note, really. «hexagonTHEORY» 05:22, 15 November 2010 (UTC)

No, the narrator said: "Now, with this remarkable Snivy as his fifth Pokémon in the Unova region...". That obviously includes also Pikachu.--電禅Den Zen 14:36, 10 August 2011 (UTC)

I could be wrong but didn't Snivy use a variation of Leaf Storm in the battle against Koharu and Gothita?? By variation I mean new animation. Is that trivia worthy??RBK 22:58, 22 November 2011 (UTC)

New animation, not a variation, and it first showed up in the Maractus episode. Not notable since move animations change constantly throughout a series.. Ataro 23:00, 22 November 2011 (UTC)

Well not really, only three pokemon have had a move actually change the way it's used, Tranquil, Snivy, and Oshawott. It seems kinda rare if you ask me.RBK 23:17, 22 November 2011 (UTC)

We do not add Abilities until they are confirmed in the actual show, regardless of the fact that they can only have a specific Ability in the games. Also, please sign your comments with four tildes. (~ <-- These things) Ataro 20:11, 12 May 2012 (UTC)

I just noticed something in the Best Wishes! Season 2 Poster:

Umm, no. It's just a promotional poster. Ofcourse it's going to have all three fully evolved starters on it. By your reasoning, we might as well protect Pignite too. Dilophosaurus Rex 01:42, 17 May 2012 (UTC)

I don't think Pignite and Snivy will evolve. There are some other Pokémon that are not on the poster such as Iris's Excadrill, Cilan's Crustle and Stunfisk. Besides, there hasn't been a Pokémon that belonged to a main character that evolved in a movie onscreen. PattyMan 01:54, 17 May 2012 (UTC)

I've noticed that every time Snivy uses Leaf Blade with the animation she used it the first time, it appears to have a thirth arm and a green feet. And so with Buizel's Water Gun eyes color error, shouldn't this be mentioned too? --Pao27 (talk) 08:47, 19 July 2012 (UTC) 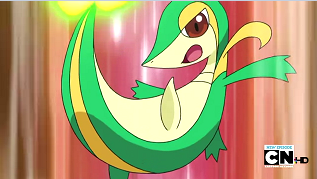 May I know the exact episode number in which you spotted the Snivy error? Because in all of the image revisions that we have here, I don't see any error. ♫♪ エイディニズ ♪♫ 11:32, 19 July 2012 (UTC)

You are right, it is indeed an error in BW040, I couldn't check BW010 though. Anyway, yes, it should be mentioned. The perfect place for these errors would be the "errors" section of the corresponding articles. Adyniz — Wanna talk? 18:54, 19 July 2012 (UTC)

My point is that it should be mentioned in Snivy's page just like Ash's Buizel's eyes color error when he used Water Gun up close. Because this error is visible every time Snivy uses Leaf Blade this way. --Pao27 (talk) 21:55, 19 July 2012 (UTC)

Would someone please re-word this with Snivy, in paragraph two at the very beginning it says, "Despite his countless defeats with Snivy, especially when the majority of his team (Pikachu, Oshawott, Tepig) succumbed easily to her Attract, Ash nevertheless followed her all the way throughout from the time they met to the point of her capture.". As I recall, Snivy has not lost that many battles in the anime, in fact, she lost just as much as she won. I think this makes Snivy look very useless when in fact, she may be one of Ash's strongest pokemon currently strategic wise. And if she does has more losses than wins, please list the battles and the results. I think this is a flawed typo. Thanks. SpyroTheDragon (talk) 01:11, 21 April 2013 (UTC)

It's stating that despite Ash battling and losing to Snivy (to capture her), he still followed her until he caught her. Not that he lost several times with Snivy, which I don't think he has.--ForceFire 02:12, 21 April 2013 (UTC)

Oh!I see it now, it confused me when I first read it, but now that I read it again I see clearly what it means, although still a little tricky to understand at first, as it seems Snivy loses battles a lot in my view. Well thanks for clarifing. SpyroTheDragon (talk) 03:37, 21 April 2013 (UTC)

Could it be noted that Snivy is Ash's only grass type pokemon that hasn't evolved or refused to evolve. Masser (talk) 20:36, 20 September 2013 (UTC)

she shown to be very powerful pokemon in ash team in unova able to battle her evolved form servine and defeated she was also said to be tough by gym leader Elsa saying she strong enough to endure flying types moves having high level moves as well --Terryberry94 (talk) 18:55, 26 July 2014 (UTC)

Remember that we don't mention how strong Ash's Pokémon are as that can be very opinionated, as Force Fire told you. We strive to provide information that is universally accepted, not ones that are derived from opinion. As the editing window says "Do not misrepresent...opinions as fact." Thanks! He's here! The one and only...Uncle Edit! (talk) 20:03, 26 July 2014 (UTC)

Snivy and Frogadier as Froakie are both similar as they left their trainers for not having right personality that will be suited for these two pokemon.

I think this should be trivia

as both left their trainers because they weren't loyalty to other pokemon or selfish trainers --SilverioBOMB (talk) 07:04, 7 September 2015 (UTC)

Not Wanting to Evolve